Life went on as usual.  Jack saw Mark most every Tuesday at the Baypointe McDonalds.  Mark told everyone there  (that would listen) about his adventure on stage.  He made it clear that he wanted to do it again.  So, he took the stage at Farmington in July 2017.  Big crowd.  Big smile on Mark's face.  The pictures tell the story.

A Story About Mark

Jack met Mark at a local McDonalds.  Jack has lunch there every Tuesday before rehearsal.  Mark is a special needs guy, who takes care of the dining room there.  His title is Chief of Maintenance.  Jack and Mark became friends and talked about everything from the Tigers to sports cars to SURF ZUP.   Mark asked about what it was like to be in a band, and the next thing you know, he was invited to come on stage and play the tambourine, for an upcoming gig.

His performance was stellar.  He didn't miss a beat.  He was on cloud nine playing for a pretty big crowd.  There was no rehearsal, as he just came on stage and played.  The crowd and of course the band loved it.  Months later, Mark continues to be excited about that performance, and he looks forward to doing it again.  So, it became clear that Mark would be the "Billy Preston" of SURF ZUP.  We gave him this photo so that he could cherish the memory.  And special thanks to John and Linda P., who own the McDonalds that employs Mark.  They brought Mark to the concert.

If you ever wondered why a band "does what it does", here is our answer:

We love to play.  We entertain.  We love it when people enjoy what we do.  We try to impact peoples lives in a positive way.  We try to give back to the community.

We are pros.  All we do is music.  Our jobs are all related to writing, producing, playing, teaching and touring.

Beyond that, we truly do want to make an impression on people's lives.  That is what music is supposed to do.   We don't make political statements.  We don't give advice on how to live your life.

We reach people with the energy and vibe of "Surf Guitar Music".  It really is infectious.

It is a proven fact that the different combinations of tones in music  can elicit different emotional responses.  Major chords are consonant, and they give you a feeling of happiness.  We play a lot of major chords.  Minor chords can be dissonant, and give you a feeling of unrest and "the blues".  We play one song like that.  It will either make you feel blue, or make you want to be a stripper.  The song is called "Rumble" .  It's an iconic song.  Jimmy Page loved it.

"Beer Barrel Polka" is a happy song.  So are most polka songs.  Happy major chords.  We are trying to figure out how to SURF ZUP-ize it and put it into our setlist.

A Story About Jake

Jake is a young man who has overcome countless medical problems.  He is tough, resilient, and always positive.  He had a children's charity named in his honor - Jacob's Fight.

Jake was invited on stage to play tambourine along with SURF ZUP.  His performance was spot on, in front of 2,500 people.   He is welcome anytime on stage.  When he learns to play guitar, we may add a third guitar to the band (for special occasions). 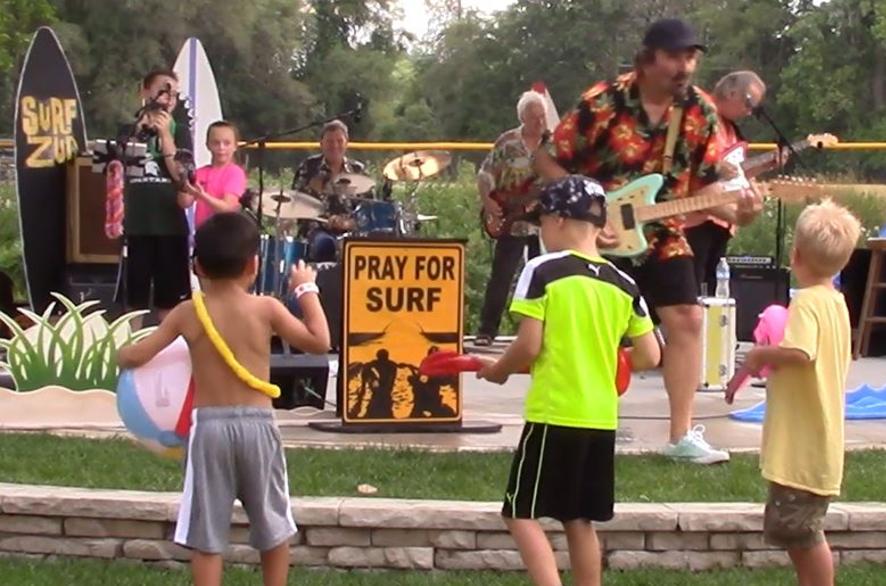 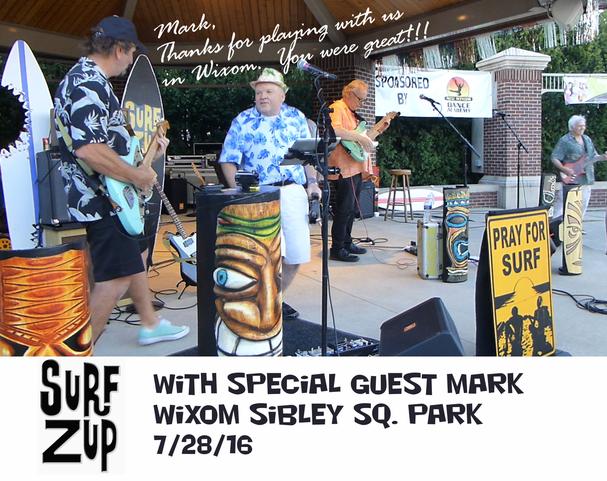 NOTE:  You can LEFT CLICK on the thumbnail photos to expand them

A Story About The Kids at Our Outdoor Shows

Kids come with their parents to our shows.  Depending on the venue, they mostly just run around and play.  We decided that we would give them purpose, so we throw out beach balls and air guitars.  Instant beach party, and who knows, we may inspire a future musician. 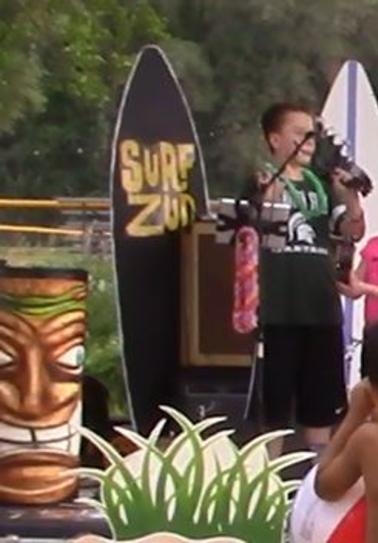 When a band plays summer outdoor concerts, the threat of rain and thunderstorms is a problem.  Electric guitars, amps and equipment don't like water.  And the band doesn't want to get electrocuted.

However, sometimes a bad situation leads to something good.  In this case, it was memorable and almost magical.

We were one song into a 90 minute set when the thunderstorm hit.  We were partially protected by a pavilion.  The audience wasn't  They soon figured out that they could come under it with us.  We didn't miss a beat.  We just turned around and played to them.  Kenny (our drummer) stayed facing forward.  It didn't matter.  The crowd felt like they were on stage with us.  They loved it.  Some of them told us it was the best concert they ever attended.  Wow.  And thank you for that nice comment!