Note:  The album cover art of the "Banzai Woodie" was  created by the amazing artist - Jim Phillips, Santa Cruz, CA. 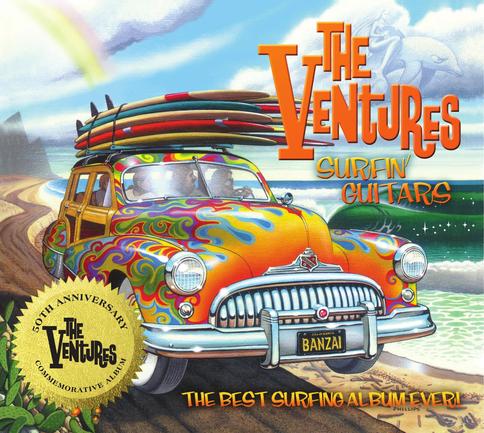 I have had the great privilege and honor to tour with and be part of The Ventures family for more than two decades.  Don Wilson (The Ventures Co-Founder and Rhythm Guitar) also allowed me be a Co-Producer on numerous albums.  In 2009, we released the album "The Ventures Surfin' Guitars, The Best Surfing Album Ever".  We believed it was the coolest collection of surf guitar songs, ever.

To augment unbelievable recordings, and the terrific album art, I wanted to write album liner notes to explain to people the significance of "surf".  So, here it is, the draft from the album:

The Ventures have never considered themselves a “surf group”.  However, there is no question that the band’s original natural style was a major influence on, if not the very foundation of, what later became known as “surf music”. Even though the term had not yet been coined in 1960, The Ventures’ smash hit "Walk Don’t Run" had all the basic elements - driving mechanical beat, powerful rhythm guitar, and crisp lead guitar with significant use of the tremolo bar. Further, many of the musical conventions found in later surf hits by other artists, included the heavy use of tom tom rolls, the muffled rhythm guitar and surf slides could all be found on earlier Ventures album cuts.

GUITAR PLAYER MAGAZINE, in a 20th anniversary issue article identifying “20 ESSENTIAL ROCK ALBUMS” described The Ventures’ "Walk Don’t Run"  as having content that “presaged the surf phenomenon, which was still a couple of years away”. THE ALL MUSIC GUIDE TO ROCK, in their section on instrumental rock, states “The Ventures were especially influential on the development of surf music”.  According to The VIRGIN ENCYCLOPEDIA OF 60'S MUSIC, “The Ventures constructed a powerful, compulsive sound that not only became their trademark, but was echoed in the concurrent surfing style.”  A GOLDMINE MAGAZINE article described the Ventures as “SURFING 101”. Clearly, The Ventures are eminently qualified to represent the genre and that is made more noteworthy by the fact that "surf music" is one of only two genres/styles native to America.

The Ventures are no strangers to surfing albums. Their 1963 top forty LP "Surfing", while not the first "surf music" album, was perhaps the most influential because of the Ventures huge worldwide popularity. Since that time, countless artists have issued surf packages, and there have been many compilations, but this collection is special. Every song has a surf pedigree either through its history or its unmistakable sound. This is a purposefully selective collection of surf gems.  For those who are familiar with Ventures recordings, a few of the cuts will reveal a subtle change in the mix.

As rock historian and guitar electronics wizard Seymour Duncan once said, “The Ventures are know by many as the preeminent surf band.  That is just a subset of what they really are…The Best Selling Instrumental Rock Band in Music History.”  The Rock and Roll Hall of Fame Induction program proclaimed that “The Ventures created a body of work that remains untouchable by any other instrumental group in the history of rock and roll.”

With a career that includes the sale of nearly 100 million records, induction into The Rock and Roll Hall of Fame in 2008 and the incredible 50th Anniversary in 2009, the band continues to tour and to record, to the delight of fans around the world.  After the countless recording sessions that have produced hundreds of classic tracks, the thousands of memorable performances on tours of numerous countries, the generations of musicians motivated to learn the guitar and drums, the good and the lean times, and the passing of good friends,  The Ventures  remain Rock Solid!

So, if you’re a surfer, prepare to be inspired to pack up the Banzai Woodie, head for the shore, and hang ten or shoot the curl. If you’re not, just sit back, relax, and listen.  In either case, we think you’ll find these songs to be "The Best Surfing Album Ever" .